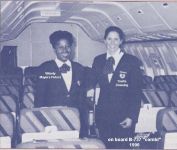 Working combis
Flight attendant Wendy Mayers Peters, left and customer service director Yvette Downing, both of Halifax, enjoy the unique opportunity of working B737 "combi" flight, which carry passengers in the back of the plane and several cargo pallets in front. The dual service role of the aircraft plays an important role in Atlantic Canada.

Canadian Airlines was a major sponsor and official carrier of the 11th annual Montreal Jazz Festival June 29 to July 8th, 1990.

Estimates have 900,000 jazz fans attending. An employee night was hosted on July 8th for the many employees attending the festival. A hospitality suite was in operation, and here is a photo of those who were involved from the Canadian Airline hospitality suite.

Canadian helped deliver three containers of some thirst-quenching Canada Dry to the Canadian armed force's base in Dubai Qatar. 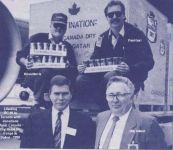 Canadian, in co-operation with Canada Dry and Danzas Canada, transported the special cargo along with patio umbrellas and cookers as far as London, Eng|and, to provide a taste of home for the Canadian troops, who have dubbed their desert home "Canada Dry'', (the nickname also has something to do with the local laws and customs concerning alcohol). The night before, Maintenance carried out work on the aircraft including changing the auxiliary power unit, washing the aircraft and having it serviceable ahead of schedule.

This was the first DC-10 maintenance to be done at the Convair Drive facility.