The arrival of our first 747 was a major event in the early spring of 1971. We in Maintenance had been preparing for its arrival for a long time and felt we knew quite a bit about them. However when you come face to face with the first 747 you will be responsible for maintaining, you feel a little humbled. It was a huge aircraft and so much was dependent on its performance and reliability. We had no practical back up for a 747 flight at that time.

After the aircraft arrived at Gate 22 of the Dorval Terminal (after its delivery flight) we moved it to our new 747 sized hangar for training and modifications. We tended to treat the aircraft like fine china as no one wanted the unenviable reputation of having "dinged" our first 747.

We had two bays in the new 747 hangar at Dorval and one was completed in time to accept this first 747. As the construction work had just been completed on this bay we wanted to be sure there were no tools, pieces of construction material or other foreign objects that could fall off the beams and walkways in the ceiling area of the hangar and hit the aircraft below. We had our facilities people check all these areas the day before and felt comfortable that all was well.

The aircraft was finally placed in the hangar.

Not long after a construction workers safety helmet was to fall directly on the top of the 747 damaging the SATCOM antenna, for which we had no spare as it was not in use at that time. We recovered the helmet but were never able to identify its owner. No doubt a worker from the unfinished bay was curious and came across the walkway to have a look at this marvellous new huge aircraft and dropped hiss helmet as he was looking down. There is an old saying..."If it can happen...it usually does".

We eventually were to become good friends with the 747's and realized that the sky did not fall if we had a technical problem with one of them. We just had to take it on as we did with every other aircraft. As I remember it, we had 38 days of the operation on the Miami flight before we had our first maintenance delay.
The honeymoon was over.

Jim Bruce refers to this article in NetLetter nr 1332 - 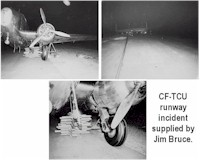 TCA Plane Damaged When Tire Bursts On Muddy Field. I remembered having some photos on file of another similar incident. I don’t have a record of the incident and location.

The aircraft, CF-TCU, a Lockheed 18.08A delivered January 7, 1941, obviously had a port gear collapse on take-off or landing. The props seem undamaged, and I guess the engine as well. In the photo,  I like the use of blocks of wood, and what looks like an auto jack, used to extend the gear. TCA records show the cost of the “hull”, excluding engine, props, and radio equipment, as being $99,651.83.

In NetLetter #1332 there was a bit contributed by Betty Driver about a TCA plane damaged when a tire burst.

As an aside to that, there was an 85 year old lady on the flight who had never flown before and was on her way out to Vancouver to see her grandchildren. After the tire failure and undercarriage collapse followed by a ground loop, the passengers were evacuated. In due course a replacement aircraft was rolled out and the passengers were canvased to determine their willingness to carry on.

All were agreeable but Captain Seagrim had a separate talk with the elderly lady because it seemed understandable that she might be reluctant to expose herself to any more "flying." Her reasoning was that crashes, as she put it, were to be expected and since she had had hers she might as well carry on.

PS: I have an aluminum ash tray made from one of the damaged propeller blades from that event.

Re the photo of Canadian's aircraft 723 referring to "last day in CP Air colours".

That should of course read "last day in PWA colours." Except for the Canadian decal on the fuselage, that aircraft is in the full final PWA livery. The problem seems to be the photo, not the caption. Note the caption you sent refers to aircraft 723 "in CP Air Colours, gliding by one of the last 737s in PWA livery."

However the photo only shows the 737 in PWA livery, not the one in CP Air livery. Maybe the photo was cropped or something in the original source but the caption wasn't changed to delete the reference to the missing CP Air aircraft!

And are you sure the FIN number is 723? CP Air's aircraft 723 is shown at Miami in 1983, registered C-GKCP, delivered to CP Air November 1,1982. It would have never worn the PWA livery shown in the photo.

The second photo of the same aircraft, dated 1991 at Orlando, in full Canadian Airlines livery, still shows it as FIN 723. So I think either the FIN number of the aircraft in PWA livery with the Canadian decal in your photo is incorrect, or the photo itself is not the one being described.

Both photos can be viewed at

Just a minor spelling glitch spotted in the item on the TCA pre-inaugural DC-8 speed records.One of the captains on the Montreal-London flight is referred to as G.B. Lotian. Last name should read Lothian. He was one of TCA's first pilots.

His entry in the for info (with TCA's name wrong...Airlines instead of Air Lines!)

(Alan - for the George Bayliss Lothian article on the CAHF site )