The Route to Hong Kong (with a stopover in Anchorage)

In our last issue I mentioned that the Airbus A340 served the YVR-HKG route for a few years between the B747 and B777 fleets. My first trip to Hong Kong was in September 2007 on an A340 that became the most interesting flight of my life.

My actual destination was the beautiful city of in China’s Guangxi province but I planned to tour Hong Kong for a couple of days before moving on.

I was given a window seat just behind the wing on the port side of the aircraft with no one sitting beside me. A fellow stock keeper was on the same flight and his sister happened to be the in-charge flight attendant. The flight took off in the early afternoon and I settled in comfortably to enjoy the ride.

At the time, movies were still projected on screens in each cabin with the flight map visible in between the entertainment. About four hours into the flight, as the first movie was ending, I felt the aircraft bank sharply but I did not think anything of it.

After the movie credits the flight map appeared on the screen and clearly showed that the aircraft had reversed course and was headed for Anchorage, Alaska. The captain came on p.a. almost immediately and explained that they had to shut down the No. 4 engine and that we would be shortly landing in Anchorage. The adventure had begun.

I watched the fuel jettison out through tubes in the wings as the aircraft descended. Still, the aircraft hit the runway very hard. When we arrived at the gate (around 18:00) we were advised that we would not be permitted off the plane but, optimistically, the repair should not take very long. The problem was a fuel pump seal and United Airlines was our maintenance provider and they were contacting an AME (Aircraft Maintenance Engineer) to change the seal.

Apparently, this was not an easy task. Hours passed as we waited for the AME to be found. It was now 22:00 and we were advised that UAL had not been successful in finding their AME and that we would finally be permitted to leave the aircraft and be shuttled to hotels for the night.

Customs was chaos and it was midnight before we were boarded on buses and driven to downtown hotels. Check in was delayed because UAL had not faxed confirmation that they would be paying for the rooms so we had to use our own credits cards as guarantees. This was sorted out by morning and we were given breakfast vouchers to a nearby restaurant.

We were back on the bus at 09:00 to board the aircraft by 10:00. Apparently UAL found their AME and the seal had been replaced. However, when we were again settled into our seats it was announced that FAA rules stipulated that a second maintenance signature was required to allow the aircraft to depart. Once again, UAL was having trouble finding a qualified person. Again, hours passed as we sat awaiting any positive announcements but none came. At around 16:00 the captain announced that arrangements were being made to fly an Air Canada AMR up from Vancouver and it would be several more hours.

For the most part all the passengers sat quietly but tempers did flare a couple of times and the cabin crew did there best to remain but they were as trapped as we were and the concern was also visible on their faces. All I had to read during the hours that passed was a Mandarin phrase book; you’d think that I would have become fluent during this time. 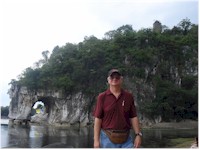 The captain came on the p.a. again around 17:00 to give us an update but he was interrupted shortly after he began speaking. He came back on a few minutes later with great news; UAL had found a second AME and he was on his way to the airport.

Finally, we were pushed back from the gate a full 24 hours after landing and continued on the Hong Kong. I had one day to tour Hong Kong before flying to Guilin where I had a wonderful time touring one of the most beautiful places on earth. I have returned to Hong Kong several times since then but this will always be my most memorable trip. Pictured at right is myself in front of in Guilin.

Were any of our readers on or involved with this flight? Possibly members of the flight or cabin crews?