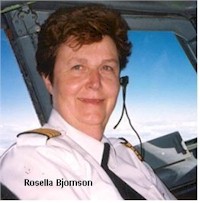 Rosella Bjornson was the foremost first officer on a jet and is a trailblazer for women in aviation. She received her pilot's licence at 17 and earned her commercial and instructor rating while attending the University of Calgary. She became the first female first officer when she was hired by Transair in 1973, and the first jet qualified female airline pilot in North America.

She was also the first woman member of the Canadian Airlines Pilots Association. She was grounded in 1979 due to her first pregnancy, and worked with Transport Canada after her second pregnancy in 1984 to help create new policy for this vital issue. Due to her efforts, female pilots were able to fly for the first 6 months during pregnancy, a major milestone for women in aviation. In 1990 she became the first female captain with a major airline in Canada (Canadian). She was inducted into Canada's Aviation Hall of Fame in 1997.Canada's Aviation Hall of Fame in 1997.