Captains of the Clouds

I think that I live a normal lifestyle for today. I sit in front of my computer working on a project (such as the next NetLetter edition) with my cell phone close by (to check text messages) and my wide screen TV a few feet away so that I can watch the news, a sports event or a movie.

Occasionally, I take a break to play a game of Sudoku on my tablet or eat a meal (while watching YouTube). Fortunately, I need to buy food so I either walk or cycle to the store. (Seriously though, I try to exercise at least two hours a day.)

While working on my article for NL 1373 a few weeks ago, I was channel surfing and noticed an interesting movie titled “Captains of the Clouds” playing on Turner Classic Movies. Filmed in 1941 just before the United States entered WWII, the film is an obvious attempt to justify their eventual entry into the war and there are references to Americans coming north to join the RCAF, however, by the time the film was released in 1942 the US had been brought in to the war. The film was produced by Warner Brothers studio (Jack Warner was born in London, Ontario) and stars some of Hollywood’s biggest stars of the time, including screen legend James Cagney.

Although, the film has a hokey plot with a completely unnecessary romantic back story, it does have some remarkable aerial footage shot in and around North Bay and Trenton, Ontario and an appearance by Canadian flying ace, Billy Bishop, playing himself during a graduation ceremony. 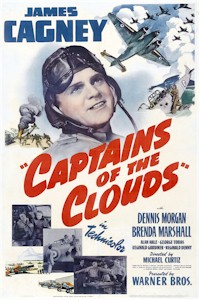 The movie was shot in technicolor and was the first “Hollywood” production to be filmed entirely in Canada and does pay very respectful tribute to the particpation of the Royal Canadian Air Force to the war effort and ends with a voice over of a snippet from the famous "Never Surrender" speech by Sir Winston Churchhill.

I don’t have NetFlix (that would be overload) but I think that the movie is available through steaming services and will probably appear on TCM from time to time.

(images of aircraft used in the film).