Amelia Earhart still in the news 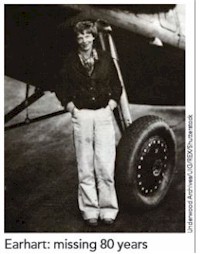 Eighty years ago on July 2nd, 1937 Amelia Earhart vanished on her mission to be the first woman to circumnavigate the globe.

To mark the anniversary, the has published a new biography on the US aviatrix, in which author Mike Roussel focuses on her childhood and early years, during which she set her heart on becoming a pilot. The book also includes press coverage of her flights and many photographs, mainly from the Mary S. Lovell collection.

Roussel examines theories around the disappearance of Earhart and her navigator Fred Noonan in their Lockheed Electra over the Pacific, but we are no closer today to solving the mystery than in 1937.

Note: We had prepared the above article many weeks ago, but as we were getting ready to send this NetLetter issue, further information was made available.

According to HISTORY’s investigative special “,” which aired on Sunday, July 9, 2017 retired federal agent Les Kinney scoured the National Archives for records that may have been overlooked in the search for the lost aviator.

Among thousands of documents he uncovered was a photograph stamped with official Office of Naval Intelligence (ONI) markings reading “Marshall Islands, Jaluit Atoll, Jaluit Island, Jaluit Harbor.” In the photo, a ship can be seen towing a barge with an airplane on the back; on a nearby dock are several people.

For full story visit: www.history.com/specials/amelia-earhart-the-lost-evidence or click on the image below.