Anatomy of a Negotiation 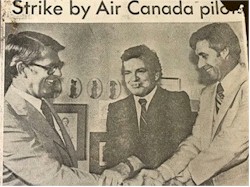 Pictured at left, Claude Taylor, John Munro and Norm Foster. The 3 principals shaking hands and later sharing a cognac spread across the front page of every major Canadian newspaper.

We stood side by side in an elevator heading for a suite on the 14th floor. I stared straight ahead trying to look serious, cool and composed. I could feel him look me up and down and then he joined me in staring at the door. Although we had never met before, we had been very aware of each other for several years. As we passed the 10th floor he turned and spoke to me for the first time. “I don’t see the horns my people say you have?”

His name was Taylor……Claude Taylor, and he was the head of Air Canada. I represented Air Canada’s pilots as Chairman of the Master Executive Council (MEC) as well as the chief negotiator, and we were at war!

In their roughly 45-year history, there had never been an industrial strike by the Air Canada pilots. Professionalism and Marquis of Queensbury rules had always prevailed, and contracts were ultimately negotiated to a mutually satisfactory conclusion. In the late 70’s, Canada was operating under Government imposed Wage and Price controls and these constraints made a wage settlement a non-issue. However, Air Canada had recently taken two actions negatively affecting its pilots and which resulted in us placing these items into the current contract negotiations.

The one-on-one meeting on the 14th floor had resolved nothing. As we shook hands and parted I was more sure than ever that a peaceful settlement, if possible, would only come at the final hour, or failing that, we would face our first strike. Becoming a test of strength and resolve, and as both sides dug in, our team began preparations for the showdown.

First, and most important, our negotiating team went across the country on a ‘Roadshow’, where we explained to the pilots the untenable position Air Canada’s actions had put us in. The success of this endeavor was proven by the results…. an unprecedented strike vote of 97%.

Because a strike at Air Canada would virtually shut down travel across the country, the Government had begun playing close attention. When we announced the strength of our mandate, we had their full attention and they immediately appointed the Minister of Labor, Mr. John Munro, to mediate. The strike deadline was Thursday and John Munro directed both parties to meet on that day at 10 a.m. to resume negotiations, and with his assistance, to reach an agreement. Our next move proved critical.

For the pilots of CALPA to go on strike, there are several steps to be taken. First, an honest and exhaustive negotiation must have come to an impasse and the Negotiating Team therefore recommends the action. The entire membership must then vote to indicate support for the action. CALPA’s Board of Directors then must vote to approve the action. Lastly, the 8-member Master Executive council must vote to give its final approval.

Meeting on that fateful Thursday, all the criteria for strike approval had been met……. but for the final vote of the Master Executive Council. For this purpose, I had arranged for a conference phone call to take place with the 8 members who were spread across the country from Montreal to Vancouver, for exactly 7 p.m. It was agreed that on that call there was to be no discussion. As the issues were clear and came down to yes or no, I would convene the call, and declare we had an agreement…. Yes or No. Following my one word “Yes” or “No” the vote would then be taken…. .and everyone would hang up.

The understanding and impact of this final item was of paramount importance. At our Thursday 10 a.m. commencement, I advised the Minister of Labor of the critical nature of the 7 p.m. call. It was made clear that without agreement, and with that phone call, it was taken out of my hands.

Logistically, it was me and CALPA’s Director of Industrial Relations, Ron Young, in one room. At the far end of a long hall was Claude Taylor and his team. The Honorable John Munro carried messages between rooms and cajoled and coerced both parties the entire day. It is difficult to remember how we could spend 9 hours restating and rehashing positions that had not changed in weeks. What I do remember was the startling jangle of the phone at exactly 7 p.m.

As the time counted down, John Munro came to realize and accept that CALPA's position was nonnegotiable. If there was to be an agreement, movement had to come from Mr. Taylor. He alone could undo his actions that got us to this point. Vividly, I recall Munro rushing into our room at 6:55 p.m. and pleading for more time, as he felt that Mr. Taylor was feeling the pressure to move. Apologetically, I restated our 10 a.m. discussion. In 5 more minutes, it was out of my hands. As he rushed back down the hall, he could hear the phone ringing in his ears.

What had been a great idea when planned, suddenly became a double-edged sword. I could sense victory at hand, but had no time left to grasp it. After 6 rings I reluctantly picked up the phone. To angry calls for “Yes or No” I tried to stall for time. Facing a mutiny, my final gambit was to require a verbal roll call prior to the vote to confirm the proper make-up of the conference call. Finally, out of ideas, I had “No” halfway out of my mouth when Munro, breathless from his lengthy dash down the hall, burst through the door and gasped “Yes!!!!!”

Ironically, members of one of Air Canada’s unions that had recently completed a bitter negotiation, reacted immediately by commencing a wildcat strike, virtually shutting the airline down for 3 days.