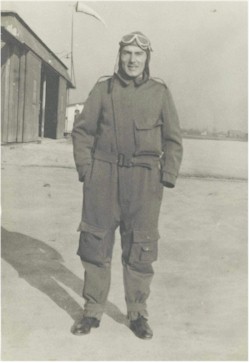 As many of us have been doing during these unusual COVID times, I have been sorting papers and came across a letter from one of Trans-Canada Air Lines first employees, Irving F. Thomas, a family friend and fellow cottager at Sauble Beach, Ontario. The letter was post marked 1991 and I, at the time, was an Air Canada passenger agent at YQGTR (Windsor, Ontario) so his recollections of the early days of the airline were of particular interest to yours truly and would love to share.

First, some background information about Mr. Thomas which was willingly supplied by his niece, Anne Venton, who I wish to thank for providing same as my memory is a bit rusty about all those details.

Irving F. Thomas was the fourth employee hired to organize Trans-Canada Air Lines. He was a recent graduate from the University of St. Louis, Missouri, the Aeronautical Division, receiving his Bachelor of Science degree in Aviation Administration and also a U.S. Transport Pilots license, including instrument rating in 1936.

He was hired by C.D Howe when Howe was Federal Minister of Munitions and Supply in the King government and later Minister of Transport. Mr. Thomas played a key role in planning the airline which was initially to serve Winnipeg to Vancouver and subsequently across Canada, U.S.A, the Caribbean and Europe.

In 1942, Mr. Thomas became T.C.A.’s Operations Manager at LaGuardia airport in New York and during this time he describes some highlights of his career including meeting movie stars, politicians and having the Pope present him with a medal at the Vatican. It is this meeting in Rome which the following describes in his letter.

“This noteworthy meeting occurred in 1949 when a Papal messenger from the Vatican interrupted our Saturday morning airline Research Plenary session in the Grand Hotel and delivered a personal invitation from the hand of Pope Pius XII for our nine international airline executives to visit him at his Vatican residence in the palace that afternoon. Being the invitation was addressed to me, as chairman, I graciously accepted.

This was a total surprise on our part. As it turned out, upon our arrival at the Papal reception hall, the Pope’s personal secretary advised me that His Holiness wished to learn more about International Aviation and I advised him that I represented Trans-Canada Air Lines, ICAO (International Civil Aviation Organization) and also the Federal Air Services.

Upon meeting with the Pope, with his secretary attending, by reason of his official invitation, he outlined that up until 1949, the Papacy had not used international air transport services for Vatican Papal visits to foreign countries and his Holiness began questioning each air carrier on it’s performance and safety standards.

It was my distinction to enjoy the longest interview separately with the Pope, explaining the purpose of our Research Session to seek ways and methods of standardizing all airline operations methods for world travel safety. He was most curious as to how this new ICAO organization would develop to control safety standards and maintain same. He also realized that T.C.A. was in the foreground of this much needed international air travel development, in that we were working closely with the ICAO offices and the member-state ambassadors in Montreal and with IATA headquartered in Montreal for every international airline in the world.

The Pope expressed gratitude for this “learning session” and gave us each a blessing and holy medallion. I took this occasion, with his blessing, to present the Pope with a copy of our provisional airline operating regulations.

It is most gratifying to realize today that our efforts on standardizing airline operations have provided safe and comfortable air travel for his Holiness to visit every continent and country on our planet.

(Footnote: Mr. Thomas retired in 1965 after almost 30 years in which he saw T.C.A. develop into world class Air Canada. It is indeed an honour and a privilege to have known this remarkable pioneer of the airline industry.)

A group photo, time and place unknown. Mr. Thomas is 4th from right next to man with hat (below). 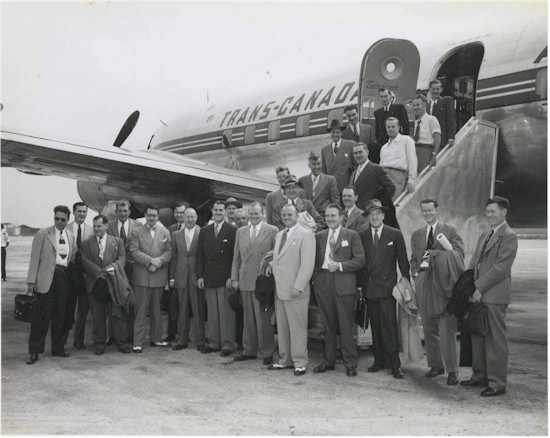